“I don’t run! If you ever see me running, you better run to….. I’m probably being chased!” I saw this on Instagram a while ago and thought that just sums me up!!

I knew I wanted to do something for all the people who had helped us in what had turned out to be a really bad year for our family, but also knew it wouldn’t be running a marathon. That seems to be the most popular choice!

I then came across a Facebook post asking for people to climb the 02 to raise money for Ronald McDonald house oxford and it seemed like something that I could manage J I knew it would also help the fantastic charity who had made life so much easier. They gave me a comfortable, quite place to go at a highly stressful time. They were a fantastic!

I knew I needed back up so I called upon the best friend Hayley Carter who was only too happy to help despite being petrified of heights! For the next few months we worked our little socks off rounding up sponsorship and between us managed to raise over £400!!

September 20th, climb day had arrived. With a mix of fear and excitement I rounded up my cheerleading crew in the form of my husband and four children, we headed off to meet Hayley at the 02 Arena. It was only then that I realised that I had never actually been to the 02 Arena before and didn’t realise actually how tall It is! Feeling extremely nervous Hayley and myself checked in with the other members of team oxford to be briefed and harnessed up ready for the climb. 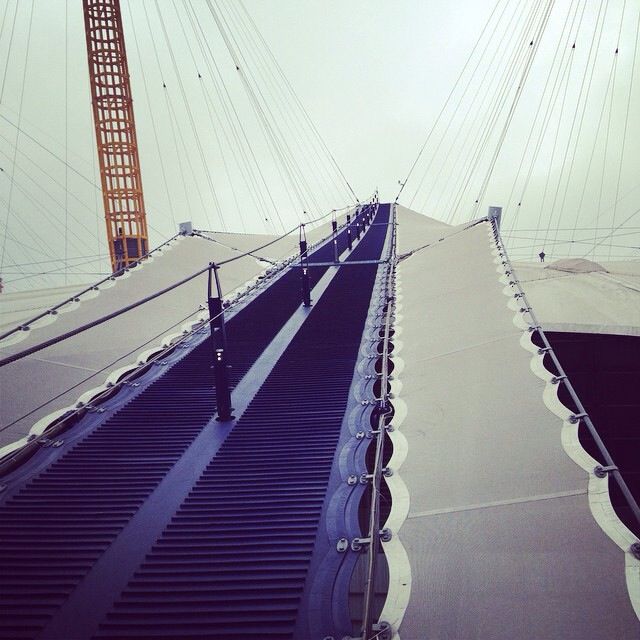 Being the little chatterboxes we are when we are together we giggled all the way to the foot of the very springy suspended bridge that we were to be tied on to. Feeling slightly apprehensive we got hooked up and started on our way! The first part was a weird feeling of burning in your legs as you pulled yourself up the incline, wondering if you could keep it up all the way, it was a long climb. The surface then changes and the climbing gets much easier albeit more springy and slightly wobbly…. I think it was round about here that Hayley announced rather loudly that she needed a large glass of wine!!

I could see our entourage on the ground waving at us and they all ready looked so tiny. It wasn’t long and we reached the viewing platform at the top where we had 20 minutes to take in the stunning but slightly misty view of London, and of course do some tweeting and Facebook bragging! Our guide pointed out the sights to see such as the shard and canary wharf they showed us where there is an inland beach being built by the river Thames which will have a zip wire from the top of the 02 all the way to the beach (Next possible challenge?). 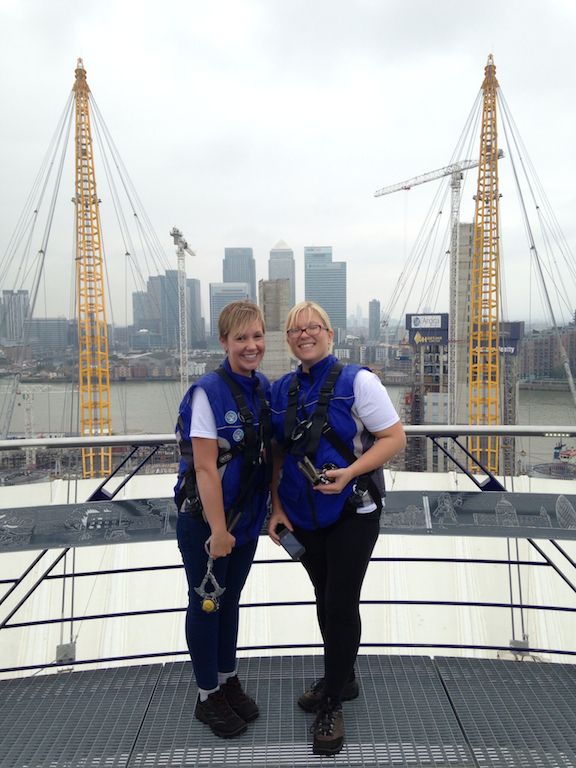 Finally came descent which was probably the most challenging part as it was very steep and longer than going up due to the fact you have to climb stairs first to reach the start which is about quarter of the way up. We made sure we were at the back so we didn’t hold anyone up and off we went down the bouncy track until we had our feet back firmly on the ground.

Feeling very accomplished I unhooked myself from the safety rail and turned to find Hayley kissing the ground!! I feel very proud to say we did it and I even enjoyed it! We went to find our other halves and children who were in true Woodborough House style waiting in the bar J I got my amazing friend, who had conquered her fears for me, her LARGE glass of wine!!

I am pleased to say that all the effort paid off and team oxford have raised over £3,500 and still counting which will keep a family in a room for 5 months (which sadly some family’s will need) . Thank you to all who sponsored us and there’s still time if you haven’t!! Remember “if you ever see me running…..”

This entry was posted on Wednesday, October 22nd, 2014 at 12:01 am and is filed under Meet the team, practice news, Uncategorised, Uncategorized. You can follow any responses to this entry through the RSS 2.0 feed. You can leave a response, or trackback from your own site.

COVID Update: We Are Open

We are happy to announce that we will be remaining open during lockdown for dentistry and we have all the PPE required to keep the practice open throughout. You can leave home for medical reasons, including regular appointments.

Got it! Dismiss message

Open chat
Need help?
Woodborough House
Welcome to Woodborough House Dental Practice. If we can help you at all or if you have any questions, please feel free to message us.