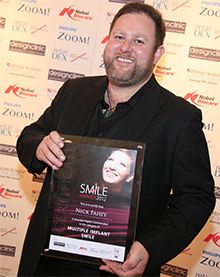 My career highlights are numerous. I suppose my first big highlight was when I had finished my training in Otago, New Zealand, I moved to Wiaroa in NZ.

Wairoa is a bit like the wild west of old. Gang shoot ups in the streets, massive bar brawls, characters both good and bad and I was to be the new town dentist. I was lucky enough to live on Whakamahi Beach and would regularly catch my dinner out of the sea or hunt it from the from the surrounding hills.

I lived with my good mate Gerald, who was the local vet and after a night on the whiskey, we decided we were watching too much TV. This resulted in Gerald shooting a hole in the TV and a master plan was hatched to live almost entirely off the land. So apart from a few basic provisions i.e. rice, flour, sugar, booze etc… all other food sources had to be laid, grown, shot, fished, netted, dived for, hunted or bartered! A veritable kiwi good life.

To counterbalance this incredible time I was having extracurricularly, Wairoa was a great place to be a dentist! Within a year I was running the practice on my own, whilst my boss was working in his practice in Auckland and due to its geographical isolation it was a great training ground. It was expected that you just had to do everything.

Due to the poor socio economical nature of Wiaroa, there was always massive amounts of surgery to be done! This is where I developed my flair for taking out teeth and doing oral surgery. In fact when I took my next job which was in London, the principle dentist asked me if I had any experience taking out teeth. He was a bit staggered when I suggested to him that I would have taken out several hundred teeth in my last job, questioning me on whether I was a bad dentist or not. I just merely showed him a picture of your average Wairoa local.

Anyway, more on London in my next blog…

This entry was posted on Tuesday, August 27th, 2013 at 12:00 am and is filed under Meet the team, Uncategorised. You can follow any responses to this entry through the RSS 2.0 feed. You can leave a response, or trackback from your own site.

Are you a dentist? Click here
Open chat
Need help?
Woodborough House
Welcome to Woodborough House Dental Practice. If we can help you at all or if you have any questions, please feel free to message us. Please note, this app is not manned on weekends but you may still ring reception on 0118 984 3108.