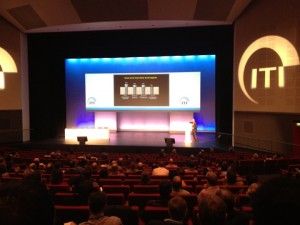 Dr Nick Fahey attended the International Team for Implantology Congress in Liverpool last week. The three day event which was held from the 1-3 December attracted a variety of speakers from the dental profession with a special interest in implantology.

Woodborough House is connected to the ITI as Nick is the host and member for his local ITI Study Club. He has been involved with dental implants since 1994 and has been using Straumann implants since 2000.

The three day programme of events at the ITI Congress included notable and high profile speakers such as Urs Belser and Daniel Buser who spoke about treatment planning in aesthetic sites and implant placement with GBR in complex cases on the Thursday morning. The afternoon programme saw implant restorations in extended edentulous spaces in the anterior maxilla and how to handle cases where the aesthetic implant fails.

On Friday afternoon Stephen Barter demonstrated an introduction to computer guided implant placement. With particular interest to what Nick does, on Saturday, the last day of the event, there were talks from Alessandro Devigus , Daniel Wismeijer and Daniel Thoma on the role of digital photography, digital imaging and computer technology in surgical and prosthetic implant dentistry.

Nick has recorded a vlog at the event and this will be posted in due course.

This entry was posted on Tuesday, December 6th, 2011 at 3:43 pm and is filed under dental implants, ITI, Uncategorised. You can follow any responses to this entry through the RSS 2.0 feed. You can leave a response, or trackback from your own site.

Are you a dentist? Click here
Open chat
Need help?
Woodborough House
Welcome to Woodborough House Dental Practice. If we can help you at all or if you have any questions, please feel free to message us. Please note, this app is not manned on weekends but you may still ring reception on 0118 984 3108.