I would like to say it came about due to my head turning good looks and smouldering on screen charm but actually my being on television all started with answering a few simple questions for GSK on some of their dental products via an online questionnaire.

Having used Sensodyne myself, I do believe in the brand and I guess that came through in answering the questions. From there I was asked to send in a photo of myself before being invited to a telephone interview. I guess they liked what they saw and heard, as before I knew it they had asked me to come along to some shoots – a very surreal experience indeed. 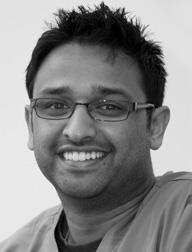 You can imagine the scene: make-up artists, camera crew, lighting, directors and me, though unfortunately we weren’t in the personal trailer I had been hoping for. Whilst my hair was being gelled up and foundation put on, my very lovely director was briefing me on proceedings;

‘Sen, we are just going to ask you a few questions and we want you to answer them as openly and as honestly as you can.’

There was no script – they just wanted to hear what I had to say about tooth sensitivity and how Sensodyne toothpaste can help, and a couple of hours later, we were done.

That was over 6months ago. I had told very few people about the shoot and we all soon forgot about it. Then many weeks later I remember I was attending an evening at Woodborough House for a series of lectures given by our specialists, when I got an SMS to say that I was going to be used for the commercial and it would start airing the next day! I kept very quiet about it, but the next day my phone went crazy nonetheless with message after message.

‘Can I have your autograph please?’

Some people were even looking around their living rooms thinking I had broken in to talk to them about toothpaste when in fact I was just on the TV!

It was a great experience and a lot of fun. Off the back of that, Peter Jackson did call me up and ask me to be in the second of the Hobbit trilogy but Sarah and Nick said I couldn’t have the time off. Ah well, there is always the third one Peter!!

This entry was posted on Tuesday, April 16th, 2013 at 9:32 am and is filed under general dentistry, Meet the team, Uncategorised, Veneers. You can follow any responses to this entry through the RSS 2.0 feed. You can leave a response, or trackback from your own site.

COVID Update: We Are Open

We are happy to announce that we will be remaining open during lockdown for dentistry and we have all the PPE required to keep the practice open throughout. You can leave home for medical reasons, including regular appointments.

Got it! Dismiss message

Open chat
Need help?
Woodborough House
Welcome to Woodborough House Dental Practice. If we can help you at all or if you have any questions, please feel free to message us.